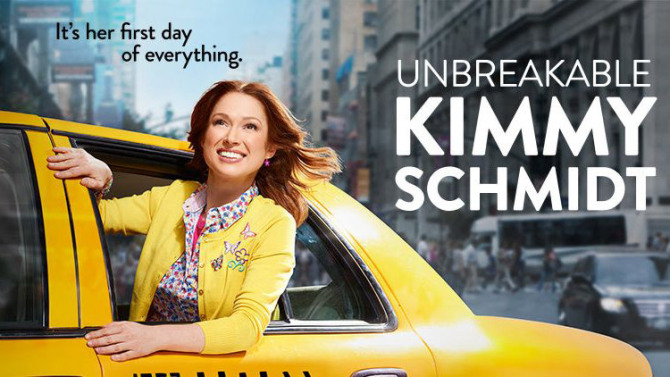 6 of 13 episodes watched for review

In scene one, episode one of Unbreakable Kimmy Schmidt, Kimmy Schmidt is rescued from an underground bunker. For 15 years, Reverend Richard Wayne Gary Wayne brainwashed Kimmy and four other women into believing the world above ground had been destroyed on judgment day. When Kimmy emerges from the bunker, she is ecstatic. “It’s all still here!”

Ellie Kemper, as Kimmy Schmidt, radiates happiness. She hops and skips, pulls faces, and gobbles candy, and when she’s down she trudges and drags her body through whatever situation she’s in. Kemper is an excellent physical comedian and gracefully enacts not just Kimmy’s exuberant joy, but her deep-rooted anger. Kimmy’s escape from the bunker is where the plot begins, but Kimmy’s escape from her personal trauma is the driving force, and the root of the comedy in Unbreakable Kimmy Schmidt.

Immediately after the rescue of the “mole women,” the authorities take Kimmy and the others to New York City, where a morning show host coaxes out the grizzly details of their tragedy. The mole women get a wad of crowdsourced “mole money” and one of the more tragic looking women gets a makeover. Everyone is having fun but Kimmy. When the women are about to be trucked off back to Indiana, Kimmy jumps out of the vehicle. She doesn’t want to be known as a mole woman for the rest of her life. She wants to start again where no one knows her and her traumatic past.

And so, Kimmy skips into a new life in New York City with a little hope, a purple backpack full of mole money and an iron will that won’t let anything break her. The first thing Kimmy does is seek out an apartment. She calls on the first classified ad she sees and meets Lillian, the drug-addled landlady, and Titus, star-on-the-rise, and soon-to-be roommate. Very quickly and with intense enthusiasm, Kimmy settles herself in her new life. Kimmy exclaims to herself, “day two in New York City. I already have a room with a door, a new pair of shoes and a black friend. Are you kidding me?? No! I’m not.” Kimmy’s emotional journey is a classic redemption story. Starting from her lowest low, Kimmy seeks a better self.

When she moves into his apartment, Titus, played by Tituss Burgess, warns Kimmy about New York. He tells her that escaping is not the same as making it. Just like Titus’s escape from Mississippi, Kimmy’s escape from her bunker to New York is just the beginning of her journey. And like Titus, she chooses to hide the past in order to do so. Kimmy doesn’t want anyone to know about her status as mole woman, just like Titus doesn’t want anyone to know about his closeted adolescence in Mississippi, just like Kimmy’s new boss, Jacqueline Voorhees doesn’t want anyone to know about her Native American ancestry. There is a lot of comedy to be had from these character’s attempts to deny or hide their past. Take for example, the scene where Titus describes his senior year at high school – he was miserable because he was hiding his sexuality, but he was also a star football player, popular, and prom king. (The crown was “so tacky that [he] hardly even wears it anymore!”) By creating such rich traumas in their character’s early lives, the creators, Tina Fey and Richard Carlock have a goldmine of comedic material to draw from. Comedy is tragedy plus time. Pain = laughs.

As the series progresses, the style of comedy develops. At first, the big laughs come from Kimmy’s naivety, the fact that she’s a fish out of water in New York. Kimmy has never seen automatic taps before, and she can’t tell cameras from phones. An especially funny running gag is Kimmy delivering sayings that an eighth grader circa 2000 would say: “Dayyyyyyyyymn”, “OH SNAP!”, “I know you are but what am I?” Her roommate makes her start a journal of “Phrases People Don’t Say Anymore.”

But Unbreakable Kimmy Schmidt isn’t just a redemption story, or a story about a country-mouse-in-the-city. It’s also a masterclass in role-reversal. Sweet, naive Kimmy often plays the straight-man. With Jacqueline, Kimmy is the more emotionally stable of the two, and often soothes Jacqueline’s temper and panic. In flashbacks, Kimmy is shown as the “sane one” in the group of mole women, even though she is shown giving her fellow bunkermate a scarf knitted of human hair. Titus learns to be brave from Kimmy, even though he’s the one with the life experience. There are so many layers of interaction between characters because each character is so lovingly written. Even the tertiary characters have something to do, and something to hide. Jacqueline’s daughter, Xianthippe, lies to her friends about her surfer boyfriend using the details from a Babysitter’s Club novel, and Kimmy hilariously confronts her about her extravagant lie. Then, Xianthippe, turns the tables asking Kimmy how she knows the details of the Babysitter’s Club Mystery #12. OH SNAP!

The scene in which I realized that Unbreakable Kimmy Schmidt was not an average comedy, is the opening of episode three,“Kimmy Goes on a Date!” In this scene, Kimmy dreams that she is Cinderella on a date with Prince Charming. All of a sudden, the dream changes and Kimmy is back in the bunker! She wakes up to screaming and finds herself strangling Titus. That scene is funny and scary and sad and unexpected but truthful to Kimmy’s character. Before then, Kimmy’s residual anger from being locked in a bunker was never addressed directly. But of course she’s angry! She was locked in a goddamn bunker for 15 years! The fact that Kimmy can feel so many different, conflicting emotions makes her such a rich character. And it looks like Kemper is having so much fun playing her.

Fey and Carlock have filled Unbreakable Kimmy Schmidt to the brim with damaged but strong-willed people, full of sadness, but also full with a will to live. They are driven to better themselves, and are open to new experiences. A perfect breeding ground for comedy. For me, the opening title song encapsulates the tone of the show: They alive dammit! It’s a miracle. They alive dammit! Females (and all people, for fudgesake!) are strong as hell. I can’t wait to watch the rest of this season.

Unbreakable Kimmy Schmidt is available to stream on Netflix.