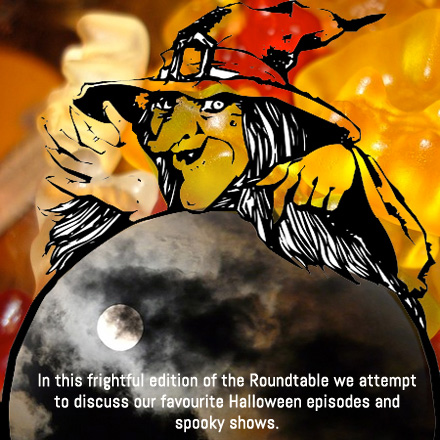 Kerri: There are a couple of Halloween episodes of television shows that made a pretty big impression on me when I was a kid.

Katie: A Halloween themed episode is almost certain to tickle my delight bone.

Jane: Up there on my list is the Community Halloween special where everybody is turned into Zombies. Although zombies aren’t my thing, I will watch a zombie apocalypse scored by ABBA songs any day!

Kerri: That Community episode is stellar, Jane, one of the more creative Halloween episodes I have seen in recent years

One of mine is the pretty much universally hated Halloween episode of My So-Called Life where Claire Danes meets a hot boy ghost! It was basically the exact opposite of the rest of the series, which, generally, is incredibly realistic. But I enjoyed it as a kid because I loved ghost stories and I also loved that the little sister, Danielle, dresses up as her older sister, Angela, for Halloween. That is something I remember doing myself, not for Halloween mind you…

And obviously the “Treehouse of Horror” Simpsons episodes are also a childhood favourite. There is an awful lot you can do in an animated series that you can’t really do in a live action show. Basically, the rest of the series is forgotten for these episodes and the Simpson family and other folks in Springfield just play the parts of classic horror characters. My favourite: “The Shinning”.

Katie: The best Halloween episode, in my opinion, is from Season 2 of The Office (US). Michael was supposed to fire an employee by the end of the month but he left it until Halloween day. Then over the course of the episode he fires 3 or 4 unsuccessfully and 1 successfully.

Throughout the episode, Michael is such a dick but it’s only because he cares about everyone so much. He doesn’t want to fire anyone. The moment at the end of the episode when Michael is alone in his house, handing out candy to trick-or-treats is devastating.

Kerri: That is a great episode, Katie. One that I forgot had any holiday attachment!

Jane: I agree, Kerri! I love to watch characters dress up for Halloween. What are some of your favorite character costumes?

Two that come to my mind are Britta  as the Modest Squirrel and Peter Griffin as a pant-less Donald Duck.

Katie: My favourite character costume is Tom Haverford as T-Pain on Parks and Rec.

Kerri: Yes, I think watching characters dress up is one of the best things about a Halloween episode. I’m thinking of all of those classic Roseanne costumes…

Jane: Yes, Roseanne! That was definitely a childhood favorite. That family was completely committed to Halloween in a believable way.

Kerri: More so than any real family…

I also love it when the costume a character wears turns them into whatever that costume is. A good example of this is the appropriately titled Buffy the Vampire Slayer episode, “Halloween”, where a curse turns the characters turn into their costumes: Xander is a military dude, Willow is a ghost and Buffy is and olden-timey woman.

Katie: Another moving Halloween episode, is the one from Freaks and Geeks, where Lindsey and her friends egg her brother Sam and his friends. It’s a good mix of sadness and delight (because we get to see Martin Starr as the Bionic Woman.)

Kerri: That is my favourite, Katie. I hate when the kids throw all of the cookies that the mom gives out on the lawn in favour of pre-packaged treats. It breaks my heart.

Katie: Same for the fact that Sam and his friends are clearly too old to be dressing up for Halloween. They want to cling onto childhood so desperately, but they just can’t anymore.

But what about legitimately scary shows…any thoughts?

Katie: I don’t watch scary shows because I am a baby.

Jane: I recall an episode of Criminal Minds with Halloween as a backdrop. Although none of the characters dressed up. Wait a minute Garcia must have.

Kerri: I feel it is my duty here to mention Are You Afraid of the Dark, which ran in the 90s on YTV in Canada. It was like every episode was a Halloween episode. I watched the crap out of that show as a kid because I loved ghost stories, like I mentioned. It wasn’t too scary, it was for kids after all, but it had a nice blend of spooky and goofy. Plus it starred a bunch of recognizable child/teen actors of the day.

In terms of legitimately scary shows, I think the scariest for me (and this continues to be the case after years and countless hours of TV watching) is Twin Peaks. When Bob appears in that mirror or climbs over that couch…I can’t even think about it without getting chills.

Plus, I watched it as a kid, so the memory of it is probably scarier than the actual imagery.

Jane: Twin Peaks is my pick for best scary show. My roommate and I watched most of that show while hiding our faces under a blanket!

Katie: Getting back to The Simpsons, I actually found some of their “Treehouse of Horrors” disturbing as a young child. Especially the bits with the aliens.

Also, I can’t think of Poe’s “The Raven” without picturing Bart as the Raven. “Nevermore, sqwak!”

Kerri: Yeah. I can see that Katie. They certainly were disturbing enough…

Jane: The scariest Simpsons for me was the episode where they realized that children tasted delicious and started making them into cafeteria meals. I remember they made the German kid into sausages.

Kerri: Uter! He would taste of chocolate!

Totally off topic, but I would love to see a Halloween episode of Downton Abbey.

Kerri: Had Halloween been invented yet? Also, YES! If Anna dressed up as a mouse I think my entire television-watching career would be complete!

Kerri: Hilarious! My pick for Don Draper: The Tin Man from Wizard of Oz.

Kerri: Do you guys have another character? Then we will wrap up. For the game I mean.

Kerri: Nice. Katie, do you want to pick one more before we end things?

Katie: I surely do. Kate Winslet.

Kate Winslet as the Hunchback of Notre Dame.

Kerri: Kate Winslet was on an episode of Extras…so she counts. My pick for her is Helena Bonham Carter.

Katie: How about…. Millie from Freaks and Geeks?

Katie: A panda. Don’t know why. Just want to see it.

Katie: Well done all. Millie as the Terminator is absolutely magnificent.

Kerri: Any final shout outs before we end?

I would like to beg Julian Fellowes for a Halloween episode of Downton Abbey.

Jane: I’d like to give a shout out to the episode of The Office where everyone dressed up as Heath Ledgers, the Joker.

Katie: Can I throw in a quick shout out to the Drew Carey Show?

Kerri: You can! You just did!