So, I have been tough on good old TV in my last few posts, giving the fine folks who work in television the jazz. This go around will be a solid gush-fest for the show I ballyhooed many months ago: Ballers! (people in the background repeating in a sing-song manner: Ballers!) I talked about Ballers back in the day without even having seen it but just happy to live in a world in which it existed. Well, since then, I have been wafting in its Drakkar Noir-like essence. END_OF_DOCUMENT_TOKEN_TO_BE_REPLACED

It struck me as quizzical as to where my monthly Shaw bill was. I’m ol’ school – l pay bills by writing cheques and buying stamps. But by some sort of a mix up my Shaw bills were emailed to me and that left me with a whopping sum after a few months. I did notice that I had not cancelled the streaming service “Shomi”. So, I did some password recovery and dialed it up.

END_OF_DOCUMENT_TOKEN_TO_BE_REPLACED

Sit Down and Have a Beer

We live in a curious age. An age where the extremely wealthy (and moderately creative) can cobble together vanity projects and drop them online, somewhat secretly, and get them out to an enormous audience. Recently, Louis CK went the Kanye route and corralled a group of his most famous actor friends, made a little show, and put it on his website. The result is Horace and Pete, a show that harkens back to the days of the multi-cam sitcom, most specifically Cheers (one of the first pleasures of the show is when you realize that they’ve done a lovely job paying homage to the Cheers set). The show stars CK as Horace and Steve Buscemi as Pete, owners of a family-run bar (called Horace and Pete’s) in Brooklyn. The bar has been passed down through the family for over 100 years, from fathers to sons all named either Horace or Pete. Alan Alda plays the curmudgeonly, spiky-tongued, racist, Uncle Pete, the bartender, who will only serve beer or straight alcohol, no mixed drinks. Edie Falco plays Horace’s sister, Sylvia, who is in a particularly a bad spot. There are a number of other actors you will immediately recognize and many other character actors that stop by for a drink (you’ll be pointing at the screen and saying, “that guy!” multiple times while watching).

END_OF_DOCUMENT_TOKEN_TO_BE_REPLACED

WARNING SPOILERS in the last paragraph

Like most Judd Apatow offerings, Love is a mixed bag. Created by Apatow, Paul Rust, and Lesley Arfin the Netflix Original series stars Gillian Jacobs and Rust as star-crossed love interests Mickey and Gus. I binge-watched Love over a weekend and have piles and piles of notes on the show. The pilot is contrived, the pace is sluggish and Paul Rust (while comically effective) over-plays his hand when given material that’s emotional. However, none of that is what I want to talk about. END_OF_DOCUMENT_TOKEN_TO_BE_REPLACED

Over the holidays we decided to treat ourselves to some quality shows by doing another round of TV Secret Santas. This time, instead of picking shows for each other, we all wrote down the names of various shows (which we had either seen and wanted others to watch or hadn’t seen at all) and did a random blind pick out of a Santa hat (or in our case a Ziploc bag). This week Jane discusses her pick, Married. END_OF_DOCUMENT_TOKEN_TO_BE_REPLACED 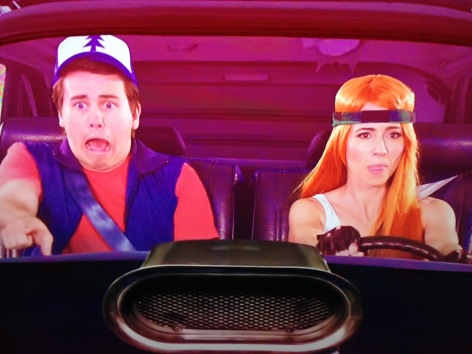 “You can’t argue with the results. People are happy here. Does it really matter if it’s real or not?” – Mabel Pines

Gravity Falls is ending. The show hasn’t been cancelled but it’s going to be over in short order. Well, kinda. One more super-sized episode – to be aired at some unspecified date (likely sometime in the new year!?!), Disney XD was never one for scheduling the show with any consistency – and that’s it. Alex Hirsch, the show’s creator (and, to my mind, genius) said that this was part of his plan from the start, to create a show about one amazing summer among two siblings on the verge of growing up. Summers don’t last forever. Amazing ones are even shorter. Weirder and weirder things have happened to the Pines twins over the course of this summer (spanning 2 television seasons) – gnomes, merpeople, sea monsters, video games coming to life, time travel, body swapping. Pretty much anything Mulder and Scully would have investigated was also investigated by Dipper and Mabel during their stay with Grunkle Stan at the Mystery Shack.

END_OF_DOCUMENT_TOKEN_TO_BE_REPLACED

You’ve done it again, Netflix! Thanks for another great comedy. I’ll add Master of None to one of my favourite comedies of the year (a list which includes Orange is the New Black, Unbreakable Kimmy Schmidt, and Wet Hot American Summer: First Day of Camp, three other Netflix originals.) Someone high up in the comedy department at Netflix is hiring the right people then giving them the freedom to dream up and create auteur works of TV. In this instance, Aziz Ansari and Alan Yang have created a moody but funny 10 episode comedy: Master of None.  END_OF_DOCUMENT_TOKEN_TO_BE_REPLACED

Recently there has been a trend on TV of what I like to think of as “small” shows. And I mean no disrespect by that moniker. I love small things. I love things with compact, precise focus. Grand things aren’t usually my style. These small shows are generally half-an-hour long but aren’t sitcoms in the traditional sense. They are shows that walk the line between comedy and drama and their focus is usually relationships on a micro level. I can think of a handful of shows like this that I watch and enjoy (You’re the Worst, Catastrophe, Transparent, Red Oaks). These shows all air on smaller networks or streaming services (FXX, Amazon, Hulu) – another trend that is allowing for more of relatively inexpensive content to be created. These shows look and feel different from brightly lit network sitcoms. They remind me of indie films in the late 90s – more raw, a little less polished, dimly lit, taking place in houses that don’t have matching furniture – but, aside from the astonishing Transparent, not about anything particularly groundbreaking. These shows are immediately familiar, if a little bit odd. END_OF_DOCUMENT_TOKEN_TO_BE_REPLACED

Would it be lonelier to discover you are the last person left on earth, knowing you will never again interact with another human being, or would it be lonelier knowing that other people are out there somewhere, to know that you could be talking to them and enjoying their company, but that you might never find them again? The Last Man on Earth began as a show about a guy who thought, wrongly, that he was all alone in the world, and then transitioned into a show about a guy who, if he wasn’t really the last man on earth, might as well have been. If the first season (back then I called it the “weirdest show on network television” and that hasn’t changed much since, more than that though it was also a very funny, sad, sometimes difficult and heartfelt show) was about the way that people can unwittingly force their own isolation with selfishness and pettiness, season two starts by exploring the way that relationships can make the feeling of loneliness more pronounced when those relationships are lost.