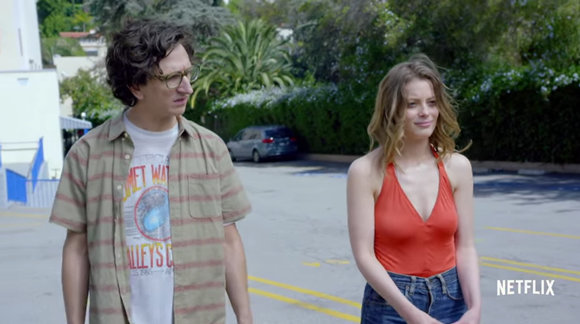 WARNING SPOILERS in the last paragraph

Like most Judd Apatow offerings, Love is a mixed bag. Created by Apatow, Paul Rust, and Lesley Arfin the Netflix Original series stars Gillian Jacobs and Rust as star-crossed love interests Mickey and Gus. I binge-watched Love over a weekend and have piles and piles of notes on the show. The pilot is contrived, the pace is sluggish and Paul Rust (while comically effective) over-plays his hand when given material that’s emotional. However, none of that is what I want to talk about.

Instead, I want to discuss that acting beacon of light, Gillian Jacobs and her magic face! I don’t even know how to begin to breakdown what is at work in her radiant, honest, tortured, hilarious, vulnerable, ferocious (I could go on) portrayal of Mickey. What captivated me most, though, was her face and how Jacobs brilliantly uses it to depict the inner life of her complicated, messy character. So here are some random fan-girl musings on Gillian’s face and why I love to watch her use it.
After a sluggish pilot in which Mickey and Gus’ existences before each other are displayed in mundane, meandering detail (Gus says I love you too much, Mickey hates that her boyfriend’s mom still buys his pants) the pair finally meet for the first time at a convenience store. Mickey forgets her wallet, Gus pays for her coffee but she insists he follow her home so she can pay him back. It’s awkward. And slow. It is a single reaction from Jacobs that zinged the show back to life.

Gus has trapped himself inside a terrible joke about how he lives inside the “O” in the Hollywood sign. Jacobs takes this hilarious beat where she tries to decide whether to ignore Gus or continue the conversation. We see the moment where she might just appreciate the lameness of the joke as her eyes come to life for the first time and she asks “which one?” Her face shines with mischief as he answers without missing a beat “the first “0” in wood”. Mickey fails to keep a smile away and holds her mouth in crooked admiration. She doesn’t fall in love with Gus here, but I love how Jacobs plays this moment of discovery that she may have met her next great friend. It’s indescribably special and that feeling is captured perfectly with every muscle in her face.

My favourite Gillian Jacobs moments on Community are watching her character Britta being called on her bullshit by the other characters. Watching Britta move from indignant to sheepish to embarrassed is pure comic joy. In the fourth (and strongest) episode of Love, Mickey is being berated by her ex-boyfriend for being a terrible girlfriend. Among other things she stole his laptop and left cigarette burns in his couch. He had dogs, ‘didn’t that ever occur to her’? Here we get so see Jacobs become embarrassed in a different context. At first it is funny watching her nose squirm and eyes dart, trying to find a way to turn the situation around. However, as the insults grow more intense “You destroy everything you touch, do you know that?” The shame that takes over Mickey’s face as her breath becomes short and color fills out her cheeks twists the tone of the scene in an instant.
Jacobs is an expert at shifting a scene with the whims of her face. The morning after the Gus spends the night for the first time, he tries to recapture the closeness they shared. He tries cuddle up to her, asks her to go to breakfast and finally reminds her of his invitation to go to a party at his house that night. Mickey is grumpy and groggy and doesn’t have the energy to engage. She rolls away from him and claims that the party “sounds stupid.” Gus leaves rejected and hurt but what he doesn’t see is Mickey swallowing a smile as she turns away. When she knows he is gone Mickey whirls around and mashes her face into her pillow in a perfect moment of delight.

Mickey shows up to the party. What she doesn’t know is that Gus has invited a pretty blond friend from work to nurse his ego. Mickey spends an excruciating night watching pretty blond friend toss around her pretty blond hair, make jokes and win over the party guests. When she escapes to the bedroom Gus follows her. Mickey immediately tries to hide her hurt. “She’s beautiful” she offers. Here she tries to recreate the bliss on her face from earlier. You can see the effort it takes to make her smile beam and her eyes sparkle. It is devastating. The skill it must take to walk the tightrope line between fake and real and too fake and too real freaks me right out!

There are many, many other moments that Jacobs captures perfectly with her incredible face. There are moments of pain that are so honest and raw and silently gut wrenching that I wouldn’t do justice to try and dissect them.

SPOILER ALERT remidner
Gus and Mickey have called it quits after a horrific argument days earlier. Mickey finds Gus (after stalking him on instagram) at the same store where they met. Her face looks pale and uninhabited as she apologies and suggests that maybe in a year they could go for coffee. When Gus pulls her to him for a clichéd end-of-season- kiss, Mickey’s face comes back to life and I give Gus and the moment a pass. If he can bring her back to life maybe he’s alright. Just as in their first meeting, when Mickey finds Gus irresistible for the first time, Jacobs was my way into the show as an audience member. If she believes in all of this I sure can.