At it’s best, It’s Always Sunny in Philadelphia is imaginative, grotesque, and always hilarious. Episode 7 of season 7, “Chardee MacDennis: The Game of Games,” is like a sweet little nugget of golden Sunny, glazed in alcohol and blood, stuffed into a bottle. It is loveable and vile, inventive but true to its characters.

“Chardee MacDennis” is a typical sitcom “bottle episode.” It all takes place in one location, the bar (the bottle), and the only characters involved are the stars of the show. Placing the characters of Sunny in a bottle and shaking really hard leads to explosive and hilarious results. Like shaking up tequila + orange juice + grenadine + gas. The accelerant in this episode is the gang’s homemade boardgame, Chardee MacDennis. And it is not a game. It’s a war.

Chardee MacDennis is an amalgamation of all of the gang’s favourite games, plus drinking. Because as Charlie (Charlie Day) explains, “I’m not going to play any boardgame that doesn’t involve me getting annihilated.” I agree, Charlie. This episode takes place on a boring Monday morning. The gang is drinking at Paddy’s Pub. When Mac (Rob McElhenney) shows up but fails to entertain the rest of the gang, they decide to play Chardee MacDennis, which was created “on a day such as today” to stave off boredom.

The rules of Chardee MacDennis are complex (and can be viewed here) but the goal is simple. It’s a race to the finish through three levels: 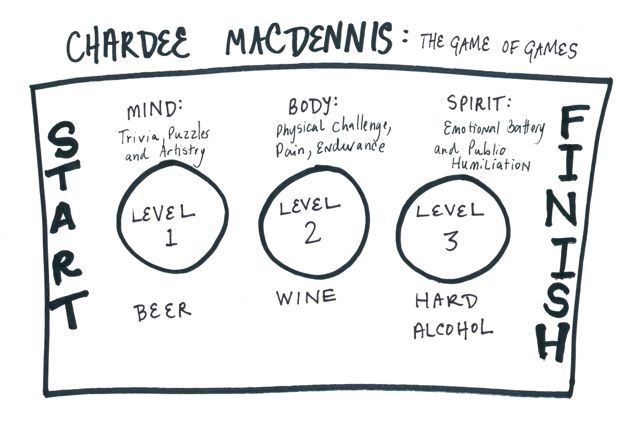 The extensive set of rules (and the overflowing rulebook) for Chardee MacDennis illustrate the gang’s love of rules. They live by very specific but often nonsensical rules of conduct. Ex. the Chardee MacDennis pre-level ritual of sportsmanship; Frank’s rule about never dating anyone younger than his daughter; or Dennis’s system for getting women to love him. They are like the cast of Seinfeld in this regard — analyzing the minutia of day to day life and creating rules for themselves to follow rigidly.

Back to the episode: The reason I consider this episode to be one of Sunny’s best, is the boardgame itself. And there are two main reasons why Chardee MacDennis is so perfect.

The game is legitimately fun.

Activities include: Cranium-style challenges (drawing with your eyes closed), the “Grape Gobble” (a human version of Charlie’s favourite game, Hungry Hungry Hippos), random trivia (Question: Dennis is asshole. Why Charlie hate? Answer: Because Dennis is a bastard man.) Other, more distressing activities include: throwing darts at your opponent’s hand and berating Sweet Dee until she falls into a deep depression.

Even though the game is completely insane, this is the type of game that would be a hoot to make with your friends. Making the game would likely be as fun, or more, than actually playing it. The fact that the gang can always work together to cure their boredom in a creative way is their best quality… even if it almost always gets them into trouble.

Everyone in the gang is fully committed to winning.

This means that every character will do ANYTHING to win. Just like in their real life. This is the perfect showcase for their specific, unique insanities.

Dennis & Dee: They are usually at odds, but when this brother and sister unite they become a sadistic force to be reckoned with. They absolutely love destroying Charlie and Mac’s spirits, so much so that viewers of Sunny rarely see Dennis (Glenn Howerton) or Dee (Kaitlin Olson) so focused on a singular activity as they are here. They love it that much. Plus, watching them constantly cheat and constantly gloat is glorious.

Charlie: Even though Charlie’s team (him and Mac) has never won, not even once, he still remains the only optimist of the group. He tries his best. He follows the rules. He fails miserable but just keeps on trying.

Mac: Mac believes himself to be the best at everything he does, so watching his frustration in the face of constant failure provides many a laugh. See: Mac trying to tip over the game board (which has been nailed to the bar) ¾ of the way through the episode, after declaring at the very beginning he would try to do just that.

Frank: The show has a lot of fun in making Danny DeVito look as physically repulsive as possible. This episode is no exception, as Frank eats the ingredients of a cake (individually) and spends the rest of the episode in a drunken stupor with flour on his face.

At the end of the episode, Charlie and Mac come as close to winning as they have ever come. The timer runs out and Frank draws “the black card.” Charlie and Mac are delighted when Frank reads the card aloud, with great anticipation: “FLIP. A. COIN.” The stakes are finally even. Dennis and Dee have a shot at losing! For a brief moment, we feel that the underdog could succeed. But this is Sunny. The winners always win and the losers always lose. Those are the rules. Dennis and Dee win the coin toss and proceed to smash Charlie and Mac’s game pieces.

Yes, the game is highly dangerous and destructive, but at least the devastation is contained within the bar. No one else can get hurt. Not only that, but we, the viewers, can rest assured that as long as the gang remains together in Paddy’s Pub they will always be safe. Nothing can hurt our precious idiots there. That’s the beauty of this bottle episode — we get to experience all the highs of It’s Always Sunny in Philadelphia without all the consequences.

One thought on “Sunny in a Bottle”