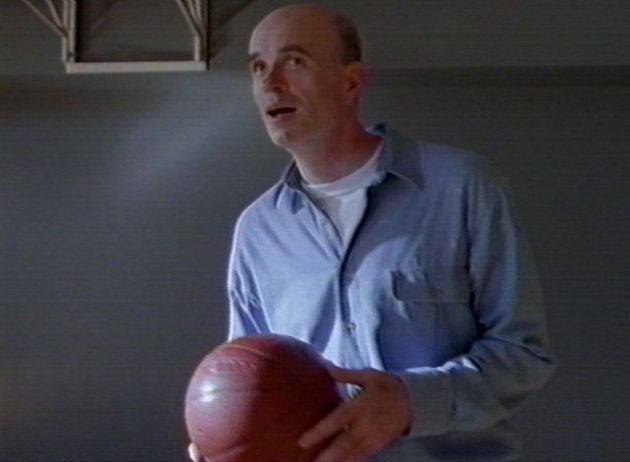 Tom Noonan does everything. From staring in, producing, writing, directing, scoring and editing award winning plays and screenplays to scene stealing performances in movies, short films and television. As a huge Noonan fan I could go on at length about the many brilliant aspects of his career but this being The Golden Age of Television I will focus on Noonan’s work on TV. My two favorite Tom Noonan roles are his guest starring spots on The X-Files and Louie. Although it is next to impossible to describe what is at work in Noonan’s nuanced and seemingly effortless performances I will give it a shot.

In Paper Hearts Noonan plays child serial killer John Lee Roche in a role written specifically for him.  The episode plants doubts about Mulder’s belief that his sister was abducted by aliens suggesting instead that Roche could be responsible.The build up to Roche’s introduction is intense as we follow Mulder down a dark prison hallway, lit dimly by the flash of florescent bulbs and scored by haunting music and the clink of jail cell doors. In an unsettling contrast with this build up, when we finally meet Roche, at the end of the hallway, he is playfully pawing at a basketball.  When he spots Mulder, Roche’s face lights up with mischief and he giddily tosses off pleasantries like, “So what’s up?” In less skilled hands, Roche would be played as snarling and intimidating, growling through lines to ramp up the deranged factor. He is a serial killer after all. At 6’7 Noonan could use his height to intimidate but instead he chooses to hunch, bringing himself closer to Mulder’s level. Noonan brings himself down to the audience’s level as well making Roche soft spoken, casual and completely accessible. We all know people like this, which makes the idea that this man murders children all the more terrifying. You could never pick him out of a crowd of regular people. He plays with Mulder in childlike, gentle manner that verges on endearing until he laughs, “Never trust a serial killer.” The way he plays against the text with this quip is chilling as we are reminded of the deeds Roche is capable of. The joy that sparkles in Roche’s eyes when Mulder asks him to talk about his last two victims is real human joy. It’s a recognizable emotion in a horrific context. Monsters are not supposed to feel the things normal people feel. This accessibility makes John Lee Roche one of the most terrifying villains in X-Files history. 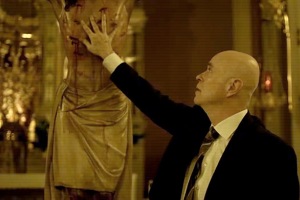 In God, Noonan plays Dr. Haveford, a man delighted with the task of autopsying Jesus Christ with a group of 12 year old school children. Noonan’s warm smile and gentle eyes draw the children (and audience) in immediately. His joy (again) sparkles through our TV screen as he gently coaches his volunteer child-Jesus, who is helping to demonstrate the Crucifixion from “a medical standpoint”. As the demonstration goes on, Noonan effortlessly shifts between enchantment and deep sadness while detailing Christ’s suffering. Again, Noonan plays against the text by matter-of-factly diagramming the blood that peeks from beneath Christ’s crown of thorns with great detail. His performance is constantly at odds with his actions whether he is tenderly stroking a flagellum (his delight while saying the word is palpable) and describing the, “thongs of leather that rip the skin,” or fingering Christ’s wounds with his massive hand while on the verge of weeping. It is impossible to know where Noonan is situated in the scene which makes its conclusion all the more devastating and hilarious as he demands his Pontius Pilate volunteer drive a nail through the flesh of volunteer Jesus.

While it is fun to delve into Noonan’s epic performance, the real thing speaks for itself.

Also, if you’re a fan of Noonan’s character work, I strongly suggest to check out his two more personal projects What Happened Was . . . and The Wife, where we are granted the rare opportunity to see him shine in leading roles.