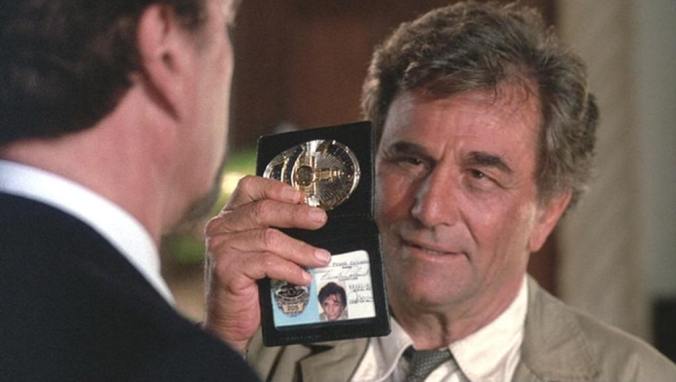 In my vast Canadian cable package, I get excited about the new content that comes in: 5 TSN’s, 3 Much Music’s are all vigorously consumed when they sign-on and then get relegated to a rare viewing. But one old warhorse has piqued my interest as of late, mainly for just one show. Vision TV is one of the originals of “specialty channels”, right up there with YTV and the old Shopping Channel that would just show still pictures rather than video. Mainly it’s the religions channel, not just Christian televangelists – although that is the bulk of their weekend offerings. It’s now run by TV guru Moses Znaimer and is geared towards geezers rather than churchies. “Zoomers” as they call it – baby boomers with “zip”. No moxie allowed. If you have spunk go elsewhere. You have to have zip. It’s now a mix of old British shows, movies, a strange talk show hosted by Conrad Black, and the very nub of my gist: Columbo! It used to be on weekly but now I’ve discovered it almost daily. Even though they are not making new ones – it’s one of the best shows on TV. Stephen Fry said so. So if you want to argue anything artsy or fartsy with him – you have more moxie and spunk than even the zippiest of zoomers.

Kevin Pollak’s impression of Peter Falk has allowed Columbo to live on in perpetuity, but that’s is just the shtick. It doesn’t capture the breadth of the show. It would have to be done on HBO today as because Columbo was a monthly two-hour crime mystery. Very expensive, as Lt. Columbo is the only recurring character and the rest are guest stars. And what a motley crew of guest stars there are. Every episode has a hodgepodge of seventies stars in their prime. From William Shatner, to Robert Culp, Johnny Cash to Lanie Kazan. Whose the killer this week? George Hamilton? Faye Dunaway? Wiliam Shatner, again? We mustn’t overlook the early work of some top directors before they hit it big as well. I was blown away as credits popped up indicating the shows were directed by Steven Spielberg. The next Jonathan Demme.

The shows themselves are marvellously meticulous. A lot of detail goes into every murder scenario as the key to the Columbo gimmick is the “we know whodunnit”. Johnny Cash poisons his victim in a plane, then parachutes out leaving her to die in a crash. The perfect crime. Of course. William Shatner makes sure he’s on his answering machine tape when he commits his heinous act so he has an alibi. Columbo is a show where the utmost of attention must be paid especially during the murder as it will get paid off later. I’m also in love with the style of the show. It’s set in L.A. but it eschews parody while still maintaining some of that gaudy luster. Turtle necks with corduroy blazers and moustaches are the norm for gentlemen. While the ladies are trapped in-between mini skits and go-go boots and rayon pantsuits and bell bottoms. Seemingly acres of thick shag carpeting line every location and all technology is as bulky and noisy as my ex-wife.

But the show belongs to Falk with his bulldog face, haggard trench coat and a curl of smoke wafting from his cigar. This was probably discussed in several TV Guide articles of the day, but is Lt. Columbo a genius or just a street smart grinder? Columbo’s bullshit is amazing. He has entertaining but go-nowhere stories about an endless stream of uncles and neighbours who are into every sort of activity imaginable. His never seen wife gardens, ballroom dances, bowls, and classic movie buffs and must watch every television show as, when anything of pop-culture arises, Columbo is quick to excitedly mention that the wife “never misses it”.

Columbo is the natty detective as he has no fedora or leggy secretary helping him out – and the show is just as much character driven comedy as is cop show. There are scenes that are not entirely essential that are basically, “Wouldn’t it be funny if”: Columbo got measured for a suit, looked at a coffee table book of erotica, worked as a film projectionist and so on. As a viewer you are pretty sure that the whole Columbo persona is an act. Meant to lure the crooks he pesters and constantly interviews throughout the show into a false sense of security. The killers are always very high-brow and affluent folk and seem at first amused and happy that the fuzz have foisted this incompetent boob on the case. They get annoyed at his pestering as he inches to key evidence and then ultimately bemused at the brilliance of the crusty old dick. You have to believe that Columbo is a part scientist, part behavioural analyst, part master problem-solver and has come up with the spiel as away of getting close to the assailant and maybe one of those brilliant people who has to make routine things as difficult as possible just so that their project keeps their attention. You think that has to be it – it just has to be. But Falk’s homespun aw-shucks cop makes you doubt that Columbo could do such a thing. He’s too honest and endearing to pull the wool over somebody’s eyes like that.

Each episode has a pleasant leisurely pace about it. I would compare it to a baseball game. Just enough activity to keep you interested woven into generous portions of meandering and opportunities to enjoy the atmosphere. The show crescendos into one last showdown with the killer and Columbo where the lieutenant reveals one minor error that was made. I am terrible at plots and figuring them out before hand. Part of it is that it seems sort of like math, which I stink at, and part of it is that my mind wants to be fooled. I tend to smile and give little golf clap at the end, as the minutia of the early part of the show comes back to a key point at the end. These types of shows were virtually ubiquitous in the 70s and 80s with the rustic McCloud and McMillan & Wife also serving in the canon of the monthly mystery movie. But I found Columbo to be the most riveting. The deft hand of Peter Falk takes what could be a character that would have over-stayed their welcome before the commercial break and turns it into something I relish some forty years after its premiere.

Raphael Saray is an unaccomplished writer and broadcaster based in Northern Manitoba. He recently ate an apple for the fist time in twenty years and was mentioned in the Winnipeg Free Press – not for the apple though.