It’s my favourite time of year (for television): the return of new TV. Sure, we had Netflix and the occasional episode of Big Brother to keep us company this summer, but fall has returned, and with it, my stories. For you today, a wee review from the most recent episodes of my favourite returning shows.

3 for 3! The second season of Brooklyn Nine-Nine continues it’s streak of above average episodes with “The Jimmy Jab Games.” The story lines in this episode are stolen straight from the sitcom canon: the tape with incriminating evidence that needs to be retrieved, the competition of mini-games at the office, but the results are funny and fresh. (Tropes become tropes because they work.)

The Nine-Nine is assigned to motorcade duties, and as a result, have a couple hours of free, unsupervised time. Time for the Jimmy Jab Games! Like the Office Olympics before them, the Jimmy Jab Games are a chance for co-workers to blow off steam while playing funny games in the office. Highlights include: eating month-old Chinese food and “print off a picture from a laptop from 1982.” Also, like the Office Olympics, the Jimmy Jabs give Peralta and Santiago ample opportunity to flirt each other’s pants off, thus continuing the will-they-won’t-they situation (that I when on and on about at length last post.)

I don’t expect much from a sitcom. Make me laugh. Show me some believably wacky characters. Brooklyn Nine-Nine has been doing it’s job. 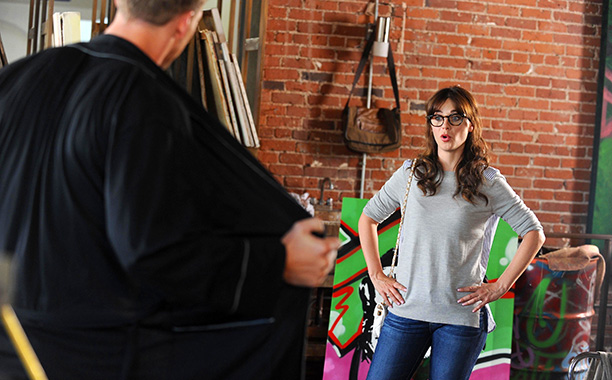 I spent most of this episode wondering if I would be offended if I had a micropenis. What if you don’t find a micropenis funny? Will you still find a half-hour of TV devoted to the subject funny? I think the word is funnier than the actual micropenis. (They don’t show it, don’t worry.)

As you’d expect, the premise of the episode is: Jess dates a man with a micropenis. This episode had some funny lines, but overall it covered well-trod territory (and not in the good, fresh way that Brooklyn Nine-Nine did this week). In “Micro”, those crazy loft-rats learn that their differences make them beautiful and unique and friendship is important. I love New Girl but I really wish this episode didn’t exist. Toss “Bells” and “Micro” into cabinet 64B and forget about them.

To clear my palette (and yours) here is some funny dialogue from last week’s episode:

One season away from it’s pearl anniversary and Survivor keeps on doing what it does best: putting mildly offensive personalities with hot bodies on an island.

Three episodes in, this season of Survivor has mostly been the “watch John Rocker say something stupid” show. But now that JR is gone, I can continue to watch the rest of this season in peace. Bullies that aren’t funny but are just sexist aren’t fun to watch. Give me a Survivor-dumb-dumb any day, but a mean bully? No thanks.

Team Yellow has been screwing the pooch and has lost three straight immunity challenges. Look sharp Team Yellow! If you keep losing, it’s going to be pretty boring for us in TV-land. We’ve hardly even had a chance to get to know Team Other Colour. Although, we did get that awful screaming match after last immunity challenge where Natalie called JR out and he told her he’d punch her face in. Good riddance John Rocker.