This week marks the 1st Anniversary of The Golden Age of Television blog. We thought we would take a look back at the past year of blogging and look into the future as well. 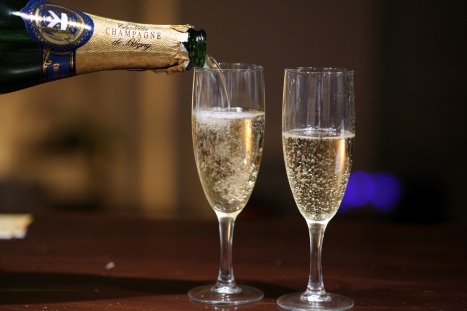 Kerri: First off, I just want to say thank you to you both and Happy Anniversary. This blog would be pretty boring without the two of you, Raph, our wonderful guest bloggers and, of course, our readers! This has been a fun year of writing for me, on a subject that I really love and really love writing about. But, it has been infinitely more fun with you two along for the ride. I feel like we’ve all pushed each other to watch shows we wouldn’t normally watch, find new shows we like, stick with and defend the we shows we love and to write on a semi-regular basis. Thanks for that, too.

Jane: Yes, happy anniversary everyone! I’ve also had a pile of fun writing for this blog and am especially appreciative of the opportunity to write about a subject I love on a regular basis. I’ve watched some mighty good TV this year!

Katie: It has been a great year for TV! If you had to choose, what would you pick as your favourite show of the year?

Kerri: That’s an incredibly difficult question to answer as there has been so much amazing TV that I have had the pleasure of watching this past year. Mad Men still ranks quite highly on my list but I was reminded, recently, how much of a joy the final season of 30 Rock was. This year I was also able to discover new shows like The Americans and Orange is the New Black, which I now love.

Jane: This one is hard for me because my favorite show is usually the one I’m currently watching. I’m going to go ahead and say Enlightened (although Mad Men is a very close second). I’ve never seen anything like Enlightened, I laughed and I sobbed and fell in love and hate with a protagonist that was completely crazy and completely relatable.

Katie: This is worst question ever because as a result of writing for this blog I ended up watching so many new shows. I’m going to have to go with Game of Thrones.

Jane: Oh jeez, I forgot about Justified. That one is tied for second with Mad Men.

Kerri: And I forgot to even mention Game of Thrones. I should be Red Wedding’d.

Katie: Perhaps that was a mean question. Better, what was your favourite show to write about this year?

Jane: That one is surprisingly easy for me. I love writing about Girls. I started watching very skeptical of the characters and the concept but I think, through the process of writing about the show, it grew to be one of my favorites.

Kerri: Maybe it’s recency bias, but I had a blast chatting with Jane about John From Cincinnati. I had WAY more to say about that show than I thought I would and as a result our roundtable is about a year and a half long.

Jane: Oh ya, that one was really fun to write about, as was Top of the Lake with Katie. The Secret Santa was a great concept for a blog. I’m super excited for round 2 next week! There’s something selfishly fun about making your friends watch a TV show and then talk to you about it.

Kerri: It’s funny you should mention that, Jane, because throughout my entire life I’ve basically been forcing people to watch TV shows with me and then talk about them. My parents, my sister, my friends, Graeme. It usually works out OK. This whole blog exercise is kinda like that too.

Katie: This was almost a year ago now, but I really like chatting with you gals about Treme. It’s coming back for a fourth season isn’t it? Isn’t it??!!??

Kerri: It is coming back for, I believe, a shortened season. We will certainly have to chat about it when it returns.

Is there a show that you have been meaning to write about over the past year that you haven’t yet? Or, something on the back burner that you would really like to finish?

Jane: I would love to write about Freaks and Geeks. I think I’ve hesitated up to this point A: because I know you girls love it so much too and B: because I like to think of it as perfect and I wouldn’t want to analysis it to the point where it loses its magic.

Kerri: I have been hoping/meaning to have some coherent thoughts about Breaking Bad at some point in the near future, especially now that I can think about it as a whole. I’m sure I haven’t written about it because it is everywhere right now and I’m not sure I’d have anything new to say. On the other hand, that hasn’t stopped me before.

Kerri: It’s almost done. There is one more episode to go (as of this writing). I will be glad it is over mostly because it has been, in this last season, so emotionally exhausting.

Katie: Perhaps a Veep article when it comes back… That Julia Louis-Dreyfus earns her Emmys every year.

Any major TV disappointments this year?

Kerri: Community was the biggest disappointment for me of the shows that I watch consistently.

Jane: Same here. It was pretty terrible. I’m incredibly excited to see what next season has in store with Dan Harmon back at the helm.

Jane: Can I suggest we end on a high note and give out final shout outs to favourite TV moments?

My final shout out is for the fist pounding tune “Father Abraham” as interpreted by the one and only Bobby Draper. Bobby had an exceptional year on Mad Men and the camp episode was one of his best. A shout out to my shout out goes to Don Draper watching with giant love as Bobby teaches Betty the actions that accompany the epic camp song.

Katie: Shout out to Raylan Givens’ jean jacket. Great moments will come and go, but that jacket is timeless.

Kerri: My final shout out is the Brienne and Jaime hot tub scene on Game of Thrones. I know I’ve talked about this scene ad nauseam to anyone that will listen but it is about as good as Game of Thrones gets. That scene is a master class in the right way to do back-story and exposition. Plus, they are NAKED in a HOT TUB.