I’ve always been a Letterman man. I mean, Carson was king, but he exited the game when I was 14 years old. Even when Carson was on the air I watched him because I knew Letterman was on afterwards. Letterman was relevant, irreverent, and goofy; Letterman was hip because of his un-hipness. I’ve always felt Leno was a complete bore. Similarly, I find Fallon, while at times slightly endearing, painfully hard to watch. I was sad when Letterman announced his retirement—I mean, we knew it was inevitable, but still, an era was coming to an end. When the announcement came earlier this year that Letterman’s replacement would be Stephen Colbert, I must admit I was sceptical. Don’t get me wrong, I am a huge Colbert fan, however, the record of new hosts successfully taking over established late night shows was not good, at least by my count. I was worried Colbert’s “personae shift” would not work, I was worried expectations were too high, and ultimately, I was worried I would have to re-evaluate my opinion of one of my comedic heroes. Luckily, after having watched the first week (4 episodes) of The Late Show with Stephen Colbert, I realized my worrying was for naught.

The Late Show with Stephen Colbert debuted on Sept. 9, 2015 and the episode, while promising, was a quite rocky. Apparently, the entire episode ran long (close to two hours) and had to be significantly cut to air on cable. Segments had to be re-shot, and technical difficulties were abound. Colbert had a big-name guest on his debut episode—most likely at the studio’s request—by way of George Clooney. The interview was nothing special. The second interview, with Jeb Bush, went slightly better. Perhaps Colbert felt more comfortable in the political realm—after all, it is where he has spent the last nine years.

The second episode went significantly smoother. Colbert charmed, and was charmed by, Scarlett Johansson. At the end of the interview he debuted a segment called “Big Questions with Even Bigger Stars” wherein he and Johansson “get real for a moment” as they lay down under the stars and ask each other profound questions like “Do you think there’s a difference between living and being alive?”, “What do you want to have happen to your body when you die?” and ”Would you rather have feet for hands or hands for feet?” Both participants were genuinely having fun and the audience loved it. Colbert was truly excited by his second guest, “the real life Tony Stark” and Tesla Motors CEO, Elon Musk. His excitement was contagious and the interview was both hilarious and informing. Hip-hop artist Kendrick Lamar slayed the musical segment. 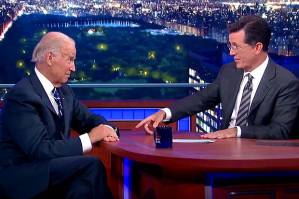 The third episode contained the most genuine moment/segment I have seen on late night TV since Letterman delivered his moving post-911 monologue to audiences in 2001. Much has been written about Colbert’s early childhood tragedy wherein he lost his father and two of his brothers in an airplane crash. His guest, US Vice President Joe Biden, has similarly been visited by tragedy losing his wife and son to early deaths. The two men spoke about how faith helped them to overcome their circumstances, the importance of family, and what it takes to move forward. It’s heavy stuff for a late night talk show, but is entirely enthralling, moving, and is the exact moment when I fell in love with the show. I wholeheartedly suggest anyone who is on the fence about watching the show to visit Colbert’s website and watch the interview.

Colbert’s first Friday night episode was as much a celebration as his first episode. “We’ve made it a week!” he declared during his opening monologue. Colbert has altered the standard late night format as well. Firstly, he announces his own guests (via voiceover) during the opening montage—it’s quite funny when the camera cuts back to Colbert in the studio quickly hiding the microphone under his desk then smiling coyly to the camera. He has also cut down the opening monologue and does the second half from his desk with a corresponding graphics screen behind him—a format he is quite comfortable with as it was his mainstay on the Colbert Report. I would be remiss not to mention what is one of greatest late night bands in history, Jon Batiste and Staying Human. (Dare I say better than The Roots?) The energy and showmanship that Batiste and his band bring to the show is amazing. Often the camera catches Colbert in the background dancing to the band—occasionally he even joins them during performance.

Batiste is a New Orleans musician who was a regular on HBO’s Treme and the music he and his band plays is entirely infectious. Colbert knew what he was doing when he asked them to be a part of his show.

There is a new late night host in town, and while it is too early to say he has risen to the level of Letterman and Carson, it is fair to say he already dwarfs the competition currently on the air. I, for one, am quite relieved. Long live Colbert.